A bit of Cowgirl history to start…..


The Cowgirls all female team have been making an appearance at Geoquest since 2005, and that being our first year we raced the Half course and were vaguely confident we could achieve the distance.  Things were a bit different back in 2005 – we had an ocean paddle (just like the Full course), we had to copy the CPs onto our maps via co-ordinates (eastings/northings) and we had to contact the maps as well.  This took a lot of time in map preparation.  Things are so much easier now!  Getting back to that original team in 2005 – it consisted of some great females in adventure racing.  Kim Beckinsale, Thorlene Egerton, Susie Blissner and yours truly to make up the 4.  We had no goals in that event other than to complete it as a happy team.


As it turned out we won the race outright – we were in shock to say the least….. The all-male team that we came in ahead of had chided us for drinking red wine the night before the event – they soon learnt this was a good strategy…..and we learnt that too….so have continued on the tradition for many years since!

Moving on the 2006 – where do you go when you win the GeoHalf?  No other choice but step up to the Full course.  We put together another great team – Janie Cooksley, Wendy Read, Kim Beckinsale and yours truly.  This race had the infamous hike-a-bike up Mt Yarrahapinni – the toughest one ever – and we Cowgirls had a 20-minute sleep half way up as we were struggling big time.  This race was one of the longest ever as well – the winning team took 37 hours and we Cowgirls finished the whole course when half the field retired or were short-coursed.  There was a 1.5km portage option on the paddle down the Nambucca River – but we couldn’t lift our titanic sea kayaks – so ended up paddling and extra 10kms around.  We kept ourselves awake (as we were now into the 3rd day..) by singing very loudly.  We found every CP but it took us nearly 53 hours – so we had missed the presentations when we arrived in on Monday morning!  This was truly an epic adventure with some truly amazing women….


2007 – we were in Sawtell!  I rounded up some more legends to join the Cowgirls.  Kathryn Preston was keen for her first Geoquest, Linda Davis joined in as did Tamsin Barnes.  It was another great team.  We made it out through the surf on the ocean paddle and went on the complete the event again. I think we finished in 48 hours that year – with a swim across the same creek as 2017!  Kathryn Preston went ahead in leaps and bounds after her initiation with the Cowgirls – it was great to have the opportunity to show her the ropes…


2008 – I had Thor, Tamsin and Alison Curtin in the Cowgirls that year.  We survived the ocean paddle once again.  It was another great experience and we finished in about 42 hours with champagne on the finish line at 2.00am – yee-ha!

In the years since then the Cowgirls have been firmly ensconced in the Geo Half.  I have had some amazing girls come through my team and demonstrated to them what girls can do on their own. Lee Burgess, Julie Drysdale, Diane Croft, Mandy Caldwell, Susie Blissner, Gina Dunsdon, Michele Krome, Wendy Flanagan, Kelsey Harvey, Linda Thompson, Cass Kimlin, Shan McGrath, Abbey Anderson and Kelly-Anne Speight – you are all extraordinary women and I hope you are proud to have been part of the Cowgirls Tri Adventure……as I have been so pleased to have you on board! Not one cross word or one complaint has been made from these girls over the course of 13 years…..and no tears either…..pretty incredible I think!

So…..it’s 2017.  We are back in Sawtell.  I am now 57 (!) – luckily the rest of my team is much younger J  Kim is racing with the Mountain Designs Wild Women – we have a house full of women ready for adventure!  We are happy to see there are 2 other all-female teams entered in the Half course and one other in the Full course.  Girls are finally breaking away from the role as the ‘token’ female…
The east coast low had brought the rain to the mid-north coast (as it did in 2011 when the event was eventually called off..) and we were faced with another critical situation where the race director had to make hard decisions for the safety of the competitors.  A few sections of the course were cancelled, including our only paddle!  This meant we had about 43kms of trekking and 60kms or riding.  There was no question our legs were going to suffer!
The Cowgirls have been doing this since 2005 – getting women out there together, driving our own event, carrying the gear, making the decisions and finishing up with a bond that you can’t really describe to anyone who hasn’t done this.  Thanks to all the Cowgirls over the years – you have been awesome – and hopefully we’ll ride again for a few more years to come.  Yee-haa!! 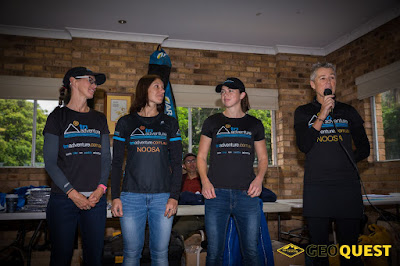 Posted by TriAdventure Noosa at 8:16 PM