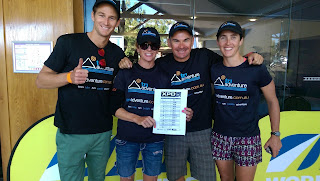 Tri Adventure, for those who may not know, is a very small and quite different personalised coaching business based at Noosa on the Sunshine Coast, in Queensland. Co-founders and Coaches Jan and Kim after realising the health and lifestyle benefits gained through the training and preparation for Adventure Racing, decided they wanted to share their knowledge and experience with others, so they too could experience a life full of fun and adventure whilst exploring some of the beautiful Noosa Hinterland.

So, after many years of competing in and preparing others for some of Australia’s iconic Adventure Races, such as Geoquest, Hells Bells, the Keen Adventure Race, the Mark Webber Challenge and XPD Tasmania, we thought wouldn’t it be great for us to uniquely put together some of our ‘Tri Adventure’ athletes to take on the next version ‘Australia’s Toughest Adventure Race – XPD’ in Townsville. As Kim had raced in and completed two such events with Team Mountain Designs, and Jan seeing the events from the other side taking on volunteer roles for both, we wanted once again to be able to pass on what we have learned to others and help a group on a journey to and through a race such as XPD.
A plan was hatched. So a few weeks before XPD entries opened…..we started having some conversations and planting some seeds in the minds of Gina, Cassie, Alex and Dyson…..and soon XPD as Team Tri Adventure became a reality. In the lead up to XPD we have had the opportunity to watch the team grow and develop as a team and develop all the necessary skills that they a will take into an expedition race such as XPD. Along the way our Tri Adventure Training Group members and friends have been there too, taking part in some or all of the races and adventures that we conceived to help prepare the team for XPD. The Team have had two hit outs together racing as a team in the Rogue 24 and in the Geoquest Half where they finished in a podium position. It’s just really all about having fun and seeing the beauty in the outdoors and having the fitness enjoy it.
So Gina, Cassie, Alex and Dyson we know you will have plenty of followers  and support out there whether they be out on the course (Kim, Jan , Michele & Greg Krome – Volunteers; Mike & Mandy, James Pitman - Media)  or back home watching the dots on the live tracking. On behalf of Tri Adventure and all of our training group we want to wish you well and hope that together you have the experience of a lifetime.

Team Tri Adventure – Team 32 XPD Qld Tropics 2015
Gina Dunston – ‘Gini’ Probably the fittest mum you will ever meet and also an Equestrian enthusiast. When Gina’s not running, MTB riding, paddling or swimming she is taking of here family and her horses out in Yandina.  Gina was an XPD Finisher 2013 so she brings plenty of experience to the team having been in the sport the longest. Gina always stands out in the crowd because she in ‘NOT’ matching and because of her cheeky smile! 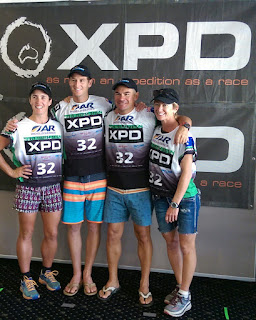 Cass Kimlin –  ‘Cass’  - comes from Maryborough and teaches PE in Hervey Bay. Cass comes from a very successful Triathlon background and funnily enough first met Kim when she was representing Queensland in Triathlon back in the 90’s. Now that Cassie has many Ironman Triathlon finishes under her belt she has more recently ventured off-road and taken to sport of AR and Multisport.  Cass is one tough chick and brings to the team ‘humbleness’, a quality that nowadays seems to be overlooked.
Alex Austin – ‘OZ’  -  is Noosa based  PE Teacher who also coaches nippers for the Sunshine Beach Surf Club, whilst managing the ‘Surfing  Excellence Program’ at his school.  Alex is a well-travelled young man of many talents and brings a sense of youth and enthusiasm to the team. Alex has taken to navigation like a duck to water and is so excited about where XPD will take him and the team.

Dyson Findlay – ‘Mr Findlay’ as known to the Qantas flight staff as he flies back and forth from Karratha in WA. Dyson with a background in cross country skiing took up Triathlon several years ago when he moved to Noosa and joined the Noosa Tri Club. However more recently decided to have a go at some off-road events and following his completion of the Xterra World Champs in Hawaii, it seems 2015 XPD became the next challenge on the bucket list. Dyson will certainly keep the team entertained with his Kiwi antics…hey cuzzie bro!

Jan and Kim have also had the opportunity to assist and support a few more adventure racers who will also be on the start line of XPD Townsville racing under a few different team names. 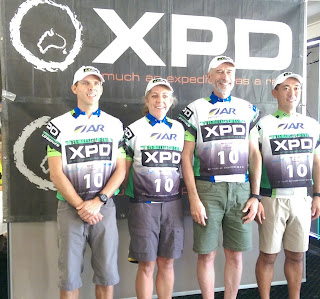 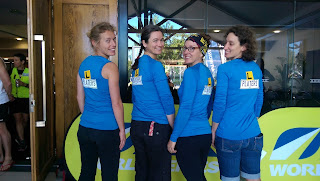 Have the best time out there all of you…..you have prepared for this event for a long time now, so take it all in your stride and capture the beauty of your surrounds every moment, and store those memories that you will cherish forever.
Posted by TriAdventure Noosa at 6:34 PM