March is here – and the year is just MARCHING on…..!!
Aunty Kim’s rehab is going great-guns but she’s still a bit tentative on the Mtb…see report below on the Mebbin Marathon….Our weekly squad sessions are hotting up and finally we have some keen paddlers and some really keen Mtb riders on our Wednesday ride.  As I write this, however, our weather here in Qld is atrocious….it’s like the BIG WET in one day….the rain is just coming down in buckets…bit different to the beginning of February when we were drowning in heat and humidity…here’s how it all panned out…
WEEKEND ADVENTURES – to KIN KIN the hard way….
Our Saturday group left about 7.15am and were intercepted by Audrey and Marius who had extended their ride by starting at Noosa…. Something about having to train for a 26 day event in June was their excuse…No, seriously they are putting in the miles so as to be fit enough to complete the Freedom Challenge in South Africa…look it up – you’ll be amazed!  Anyway we had a lovely ride, stopping at the lookouts along the way and gaining strength (that’s the positive here, people) from the unrelenting uphill slogs out on the eastern ridge…..when, finally, we were on the way down great whoops of joy were heard amongst us – we had well and truly earned this excitement…
A stop a Kin Kin for refreshments was greatly appreciated but soon we were off again – and up some unbelievable hills that Aunty Kim had conveniently forgotten about…. We managed with some bike carries to get us all up there without a dummy spit…and continued on where we had the sense to take the creek road (that would be the flat way) back to Pomona….phew…we made it – and hungrily devoured some great food at the Mountain Stop Café before heading home to collapse….Hey, hope the experience was a bit like childbirth and you’ll only remember the good bits, eventually!!!!!
AUNTY JAN IS 50…
In case you weren’t aware – Aunty Jan turned 50 and invited many of her friends and family to attend a 2-part celebration which involved an 8hr adventure paddle/mtb/eat-drink/mtb/paddle and later in the day a ‘normal’ birthday celebration with a bit of arm wrestling action just to spice it up….Here’s what Aunty Jan reported afterwards….
“We had the most fabulous adventure on Saturday and it was like being in an adventure race with all of my best friends….thanks for being part of it!
Golden moments were….
à                       Kenny having the crash of the day…
à                       The ‘v’-cake at (you had to be there…!)
à                       The special t-shirt from my special friends…it’s just so…rude?
à                       My great arm-wrestling ability… (Not…)
à                       Standing in the rain on Sunday morning watching ‘wunderkid’ win the Triathlon
à                       Being 50 and feeling like 12 on the Mtb ride out to …..
à                       Sliding into shore at Noosa Woods after 8hrs of adventure and being handed a glass of bubbles by my wonderful friends….
For those of you who came along….welcome to my world!!!”
JUNIORS AT STATE TRI CHAMPS… 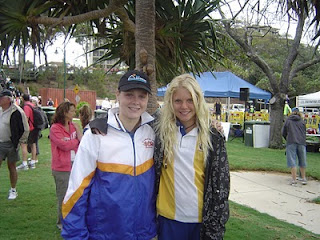 We had a huge week with our Juniors at State Tri Champs in Redcliffe.  The squad conducted themselves extremely well at the Champs and with their wonderful efforts helped the region win the cup – again!  We are very proud to be associated with all of them!
Once again Brigitte Fischer has been selected in the State Team to compete in SA in mid-March.  was also a qualifier in the Junior division.  Good luck to you both – enjoy the experience!
NIGHT NAV… 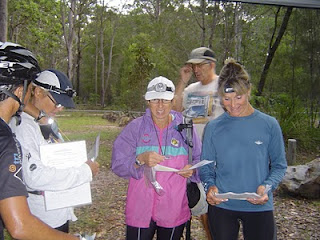 Our Night Nav session in Wooroi was really fun – we managed to ward off the mozzies with super-strength bushman’s spray, candles and Corallea even carried a burning incense stick with her as they went out on foot..!  It was great to see the smiles on their faces and the excitement as they all arrived back from their night nav adventure….
Mel blitzed the field with a score of 440 after gunning it around the course on foot and making it back on time so as not to loose hard earned points by being late….
Participants really got into the swing of it buy donning the true dorky orienteering gear… !
We took about 2 hours after the session going around retrieving the CP’s and besides dodging toads as big as small babies it was incident free and we felt like we had done an Adventure Race when we finished at 10.30pm…We will have another of these sessions here in the near future – stay tuned…
MEBBIN MTB …
Hope the soggy, wet weather hasn’t put a damper on too much fun and adventure for you all……It certainly challenged the Aunties over the weekend of the 28th February.... We made a ‘sensible’ choice - Hmmmm- (over a few other events happening on the weekend) to take a 5hr trip to the Gold Coast (via Brisbane for a couple of quick visits…) then drive another 1.5hr hours to the beautiful Mebbin forest in northern NSW – in the shadow of Mt Warning – where we would ride our bikes ‘inside a volcano’……
Well, that was the plan – and we did manage to achieve all of the above… However, the end result was a little different to what we had thought……and ‘sensible’ doesn’t seem the right adjective now – funny that….
Knowing full well we were heading for a ‘wet’ event’, we just took it in our strides – we have done many events in much worse weather than this – at least it wasn’t COLD and wet like Geo 2006 & 2009….and we rode the 2008 Noosa Enduro fully inside a cloud and didn’t have a huge problem…we did the 6hr ‘mud-fest’ at Slickers last year….and that was ok except for Aunty Jan destroyed her bike by washing it off in the LAKE…. So a mud-ride inside a volcano seemed kind of fun – in a strange sort of way…. Guess what – we were wrong!!!
On arrival at the event – the beautiful Cutters Campground in the beautiful Mebbin Forest we were informed that all the courses had been shortened because of the treacherous conditions….seems that volcanic mud is kinda slippery and dangerous….Race organiser, Anthony, had gone over the course the day before and had more than a handful of spills….and was already announcing that next year this event WOULD NOT BE HELD IN THE WET SEASON.. How bad can it possibly be, we thought?

We were about to find out as we set off with the 75km riders (now reduced to 55km with a 35km loop and then a 20km loop over the same skaty mud!)  A 3km loop took us 'around some 4wd tracks' and back through the start/finish then after that we were going 'slap-bang into the mud'…well, you could have fooled me, but I am sure I came out of the 3km loop looking like I’d been dragged though a pig pen….and we weren’t in the MUD yet apparently…..

Aunty Kim was being extra cautious as one little crash was going to ruin her entire rehab from the dislocated shoulder episode 10 weeks earlier…That ‘sensible decision’ was starting to have a few cracks at this point…. We had a 1km ‘nice’ ride up a dirt road before detouring off onto the single track….Slipping and skating all over the place, we were trying to keep a sense of humour…riders were spearing off the track in every direction and Aunty Kim had just decided to walk most of the danger areas (which was just about everything unless you were riding in the scrub..) We got to a particularly steep downhill (easy-peasy in the dry…) and some crazy guys were crashing every 5 seconds…it was completely unrideable for us – and this ride down to a creek crossing was the first of 8 !!!  Half way down Aunty Jan had a big OTB and didn’t even get time to put her hands down….a nasty thud on the left hip – just to even it up with the creaky right one – kept her lying in the grass for more time than usual….Kim was scootering just ahead and came straight back up….It didn’t take us long to decide this ‘race’ wasn’t worth continuing….(we had opted to ride in a pair anyway, which meant we weren’t gunning for any podium spots…)  Aunty Kim was probably going to have to walk most of it if we continued…and Aunty Jan was trying to ‘ride’ but it just wasn’t happening!...so we pushed our bikes up the hill and told the marshall that we had abandoned….

Then we went for the most beautiful ride in the Mebbin forest – on the fire road…. This now seems to be the most ‘sensible’ decision we had made all weekend…. We managed to clock up about 40kms of riding getting some great views of the ‘scenic rim’ of the massive volcano that once encompassed Mt Warning and on our way through the start/finish we noticed we weren’t the only ones who had made this decision…..Some were there mending their war wounds, and many were cleaning their bikes and some were just hanging around to see what the riders looked like who actually did complete the course.  Well I can tell you they looked BROWN – no other colour – and those kamikazes who made it were quite happy with themselves – and we congratulated them…. We sat around and ate the fabulous meal that was supplied with the entry – that must have been the reason we came….and then made the drive back to the Gold Coast before getting clean – our bikes, however, got a wash atop the car as it was still raining – but you can’t believe that, can you…..
So, there you have it…Sorry but you won’t get to experience this yourselves, because it won’t be on again until we have a drought….and then, well, it could be awesome…..We didn’t waste our time whilst riding on the fire-road though - Aunty Kim practiced her one-legged drill and we practiced our towing technique – so we did get to achieve something…and I mapped the entire ‘fire-road’ on the Garmin…so you can do this bit….but it’s probably already on a map somewhere – being a road and all…J
WHAT’S COMING UP?
Plenty of adventure in the pipeline….Our Bribie Multisport training weekend on 13th & 14th March. Click here for details...
The Kathmandu Adventure Race on 20th March….
Bribie Multisport….Anaconda NZ….Anaconda Forster and the Red Centre Mtb Enduro…..come along and join us for some of it….
See you out there!
J Jan & Kim
Posted by TriAdventure Noosa at 9:21 AM